EASTER 1B: Folding Up the Past! Walking Out On Death! 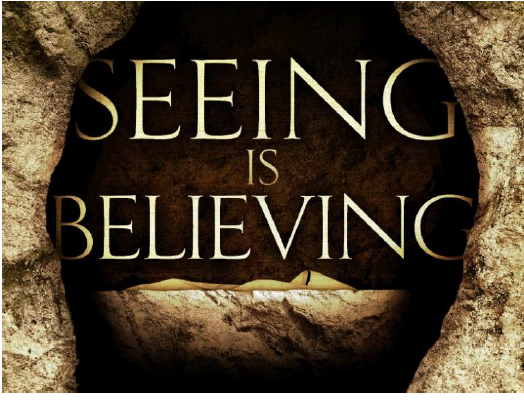 “Moses said to YHWH, “But, never in my life have I been a man of eloquence,
either before or since you have spoken to your servant.” Ex 4:10

When someone dies, what do we do after the funeral? After the initial shock and sadness, the funeral and wake; What do we do? We eventually get around to giving away the dead persons clothes and decide which of their possessions we will keep or share with family and friends. Time goes by, and all the first time special days without them endured. Some will keep a picture of the deceased in a favourite room, but we do our best to move on with our lives and tend to the living. We don’t expect to see our dead again on this side of the grave. What an incredible gospel hope we hold in our hearts that those whom we have loved and who have died are alive in Christ and will share again in Resurrection life of Christ. What an even harder thing to imagine/believe that this to will and can happen to and for us.

In today's gospel (John 20:1-9) Mary Magdalen gives witness to a typical response to death and grieving. She was still close to the tragic events of 'Good Friday'. So, she goes to his tomb, “while it was still dark.” It was still too soon to pick up the pieces and carry on with life. Mary just wanted to be close to the Jesus she loved and the tomb was the last place she saw him and so she wants to be there. Then she will get on with what is left of her life. Her life she imagines will be different and difficult, because Jesus, now the centre of her life, had totally changed her. When Mary arrives at the tomb and sees it empty, she concludes, “They have taken the Lord from the tomb and we don’t know where they put him.” Later Mary meets Jesus, thinks he is the gardener only to discover he is the Risen Lord when he calls her name. She is then commissioned by Jesus to be the evangelist of the resurrection. Her new life mission, is to witness to the resurrection of the one whom she loved in the flesh. St Peter arrives with St John and goes into the empty tomb. He notes the remnants of death, but he "... failed to understand the teaching of scripture, that he must first rise from the dead." Jesus had to rise from the dead, otherwise we would be only having a memorial of the death of a great man. His rising from the dead makes all the difference for us believers. “Prove it!” our objectors challenge. How can we! We only have an empty tomb. But, what we do have is a heart transformed by the Risen One!

However, when St John the “one whom Jesus loved” arrives and looks into the tomb, he sees the remnants of death "the linen cloths lying on the ground ... the cloth that had been over his head ... rolled up in a place by itself" and, “he saw and he believed”. We are also those “whom Jesus loved” and we are gifted with faith-sight. In John’s gospel to receive sight is to see with the eyes of faith. We have an empty tomb and still we believe he has risen. Like the beloved disciple we “see and believe.” What stirred the disciple to believe? Did it have something to do with the neatly folded burial cloths? After all, who would steal a body and before leaving, fold the cloths? Well, it is an odd detail, but not one that would stir one to believe in the impossible. If those cloths were proof enough why didn’t they help St Peter and Mary Magdalen “see and believe?” The emphasis on the burial cloths left behind, is John’s way of saying, Jesus has left death behind and has been resurrected to new life. The beloved disciple got the message, "he saw and he believed." From his love for Jesus the disciple’s faith blossomed and as a result we, who have not yet seen, are strengthened in our faith. The beloved disciple helps us believe that we too are beloved by Jesus. Through his gospel account he wants us and our communities of faith to be witnesses to our resurrection belief and hope.

Jesus rising from the dead was not just a miracle of resuscitation. Lazarus was resuscitated, and would die again. Jesus rose from the dead, never to die again. His resurrection has brought about a whole new age. Now anything is possible, everything is different. This is seen in St Peter’s conversation with the gentile Cornelius in our first reading (Acts 10:34a, 37-43). In Jewish eyes the Gentiles were pagans and losers before God. St Peter had a vision that God wanted to save the Gentiles. Cornelius through a dream and a voice was directed to seek out the message of salvation (10:1-8). God has acted in a mighty way on behalf of the human family and included all in Jesus’ salvific action. As St Peter says, “... EVERYONE who believes in him will receive forgiveness of sins in his name.” ALLELUIA!

We are an inclusive, all welcoming, non-denominational Sacramental Christian community with Franciscan leadership, who are called to Love God, Honour the Christ in others and to Respect each ones’ circumstances and spiritual journey.